Please join us for this once-in-a-lifetime leadership training experience!
NOTE -- this requires a full day of travel/engagement starting at Noon on Tuesday, May 31st.

ATTENDEES MEET at 12:00 PM in the parking lot of CABELA's (3700 Avenue of the Carolinas, Fort Mill SC 29708)
Look for vehicles with US Flags on them in the southeast open section of the parking lot!

We'll carpool to Greenville SC (CFF Board Members driving), attend the Symposium, meet/greet the speakers*, and go to Dinner!
Arrive back at Cabela's around 9:00 pm. *As a Rising Star and part of Carolinas Freedom Foundation, you're receiving a special chance to meet the speakers and receive one or more book(s) with an opportunity to have them signed. Dinner and a drink are on CFF. 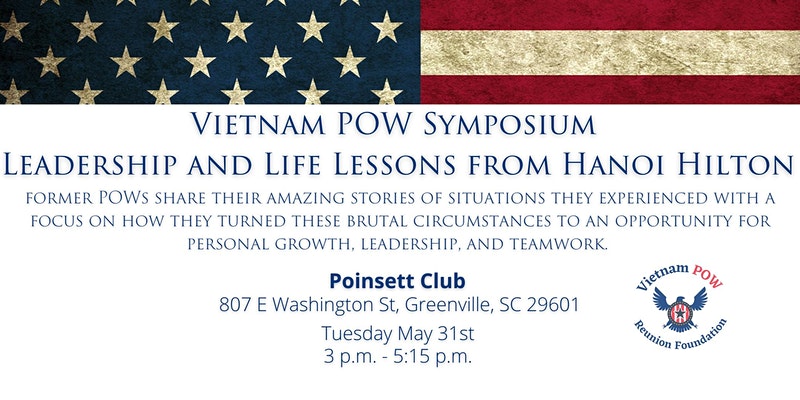 Seven Vietnam POWs share how they turned their imprisonment into an opportunity for growth, leadership, and teamwork

The harsh and challenging conditions of the Vietnam POW camps offered a unique laboratory for testing the character, courage, and commitment of all the captives, especially the leaders who suffered the most. Yet out of that experience, we can learn many lessons for individual and team development.

During the symposium, seven former POWs will share their amazing stories of situations they personally experienced with a focus on how they turned these brutal circumstances into an opportunity for personal growth, leadership, and teamwork.

Some of the important lessons to be shared are listed below.

• Know yourself, develop yourself, and believe in yourself

• Believe in others when you believe in them, their performance improves

• Clarify the culture what is the mission, purpose, what are the rules and boundaries

• Discover and employ individual talents people are different and that's a good thing.

• Faith you must believe in yourself, your team, and a higher power

Meet the Panelists: William R. Austin IIBill graduated from Clemson U. in 1960 and was commissioned as a 2/LT in the USAF. He flew combat missions in the F-4C Phantom fighter-bomber from May 1967 until 7 October 1967 when he was hit and forced to eject over North Vietnam. Bill was taken as a Prisoner of War and spent 1,986 days (5 ½ years) in captivity before being released during Operation Homecoming on March 14, 1973. After returning to his family, he re-qualified for flying and had a very successful career as a leader and staff officer. Col Austin's final assignment was as Commander of the Air Force ROTC detachment at Clemson University in Clemson, South Carolina, from July 1985 until his retirement from the Air Force on October 1, 1988. He was awarded two Silver Stars for his courageous service in combat. Bill is a native of South Carolina and currently lives in Seneca.

After attending Homes Junior College and the University of Southern Mississippi, he entered the Naval Aviation Cadet Program on January 9, 1964, and was commissioned an Ensign in the U.S. Navy and designated a Naval Flight Officer on October 15, 1964. He was on his second combat tour and flying from the USS Constellation from May 1967 until he was forced to eject over North Vietnam and was taken as a Prisoner of War on June 28, 1967. After spending 2,063 days in captivity (almost 6 years), he was released on February 18, 1973. His professionalism, courage, and dedication earned him (2) Silver Star Citations. CDR Bailey served as a staff officer in the Office of the Chief of Naval Operations in the Pentagon from July 1979 to June 1984. His final assignment was as Executive Officer of the Naval ROTC unit at the University of North Carolina from July 1984 until his retirement from the Navy on December 31, 1988. Bill and his wife Suzy live in Anderson SC.

After completing his bachelor's degree from California State University at Long Beach, California, Tom entered Officer Training School on November 16, 1967. Flying in the F-4C, he was forced to eject over North Vietnam on his 135th combat mission and was taken as a Prisoner of War on June 27, 1972, where he spent 275 days in captivity. He earned the Bronze Star Medal Citation. After his release, he received an Air Force Institute of Technology assignment to complete his master's degree at Arizona State University from 1974 to 1976. His final assignment was as Deputy Chief and then Chief of the Electronic Combat Division at Headquarters Air Force Operational Test and Evaluation Center at Kirtland AFB, New Mexico, from May 1991 until his retirement from the Air Force on February 1, 1993. Tom has served as Treasurer and President of NAM-POWs and remains a board member.

Tom McNish attended North Carolina State University for one year before entering the U.S. Air Force Academy in 1960. Lt McNish was flying the F-105 fighter/bomber when he was shot down and captured on his 45th combat mission over N. Vietnam on September 4, 1966, After spending 2,373 days (6 ½ years) in captivity, he was released during Operation Homecoming on March 4, 1973. Tom was awarded (3) Silver Star Citations for his courageous service. After the war, he attended medical school and became a doctor and flight surgeon while continuing to fly as a "top gun" fighter pilot. He was assigned as Chief of Flight Medicine in the Office of the Air Force Surgeon General until June 1991, when he became the Command Surgeon in the Office of the Air Force Reserve at the Pentagon, where he served until his retirement from the Air Force on July 1, 1994. In recent years Tom has served a tour as President of NAM-POWs.

Captain Charlie Plumb graduated from the Naval Academy at Annapolis and went on to be a fighter pilot flying the F-4 Phantom jet on 74 successful combat missions over Vietnam. On his 75th mission, with only five days before he was to return home, Plumb was shot down, captured, tortured, and imprisoned in an 8x8-foot cell. He spent the next 2,103 days as a Prisoner of War in communist war prisons. During his nearly six years of captivity, Captain Plumb distinguished himself among his fellow prisoners as a professional in underground communications and served for two of those years as the chaplain in his camp. Since his return home, more than 5,000 audiences in nearly every industry have been spellbound as fighter pilot keynote speaker Captain Charlie Plumb shares his story and the lessons, he learned from it. www.charlieplumb.com

Col Tom was an F-4 fighter pilot who spent five years in captivity. After the war, he continued his flying career and ultimately served more than 56 years in the military and in public service. His leadership positions in the Air Force included that as commander of a combat-ready fighter squadron and as the Deputy Inspector General of the Air Force Logistics Command.

In the public sector, Tom has held a number of senior leadership positions from the county to the state level including Director of the Fairfield County Office of Homeland Security, the Director of the Ohio component of the National Troops to Teachers Program and as a member of the Cabinet of Governor John Kasich as the Director of the Ohio Department of Veterans Services, one of the largest veterans support program in the U. S. with nearly one million veterans and to include the operation of two Veterans' Homes. Tom often shares lessons in leadership from his POW and life experience.

Award-winning author, leadership coach, and expert presenter, Colonel Lee Ellis (F-4 fighter pilot), shares lessons about life, leadership, and teamwork learned while serving more than five years as a prisoner of war (POW) in Vietnam. Two of his award-winning books, Leading with Honor®: Leadership Lessons from the Hanoi Hilton and Engage with Honor™: Building a Culture of Courageous Accountability, share his POW experiences and the leadership principles that helped him and his compatriots resist, survive, and return with honor. For more than twenty-five years his primary objective is to offer wisdom, practical tactics, and inspiration on how to apply these leadership lessons for personal and organizational development. www.leadingwithhonor.com

SCETV - providing streaming of the event